He was born on April 30, 1955 in Madrid, Spain. He started early as a child in drawing and, later, in painting: both activities that he developed methodically and incessantly until he decided to put an end to his work, and his life, in 2013. A life dedicated to the different experimental universes of art.

Introverted, meticulous, hermetic, Romero offers in his painting the direct reflection of his torments and his personality problems. Genius, and so far, unknown. An immense work, unpublished by the fear to be seen, or to be rejected, and which now is exhibited almost completely. Chronic depression, obsessive-compulsive disorder, psychiatry is concrete in these cases: nullifies or multiplies the artistic expression. Munch, Van Gogh or Séraphine Louis, are clear examples. Romero too. Eternally.

In the juvenile period, the example of his father, an amateur painter, and the encouragement of teachers and friends are fundamental.

He passes the entrance to the Superior School of Fine Art of San Fernando: he was especially interested in the practices of Natural Drawing , as well as by the pictorial procedures. He was a student of F. Echauz, Agustín Úbeda, Vargas Ruiz, among others.

Graphic designer and illustrator of HIARES.

Honors Degree in the Faculty of Fine Arts, Complutense University of Madrid. Exhibits at Galería Bética in Madrid: sells ALL the work exhibited, extraordinary critiques in the national press of the time (El País, Pueblo, etc.). Participates in literary and artistic gatherings, Madrid was preparing for the historic cultural “movida”, and Romero was in the front line with the Algora brothers, Marta Durán, Peña, Adillo, Fausto de Lima, Seiker Gallery, Círculo 2 Gallery.

Starts his spots on paper (100 × 70), Journey to Granada, in Madrid begins teaching art.

Complete experiences and a new series of spots, with texture and graphics as almost exclusive aesthetic resources. First sale of international work.

Initiates a series of imaginary portraits of authors and literary characters, incorporating volumes and collage into pictorial works

He continues the production of his work, interspersing his aesthetic experiments with naturalistic figuration. Design and plastic.

period in which he pours himself into figuration.

In the same way that Goya’s deafness leads to his “black stage”, or Van Gogh’s psychosis his last canvases, in the case of Romero the first decade of the millennium brings introspection, genius and a fertile stage of creativity. All previous series are completed.

In the best period, matures as a painter, distinguished as a draftsman, a sad event for eternity. Committed suicide. And with him went the genius, but not the work. 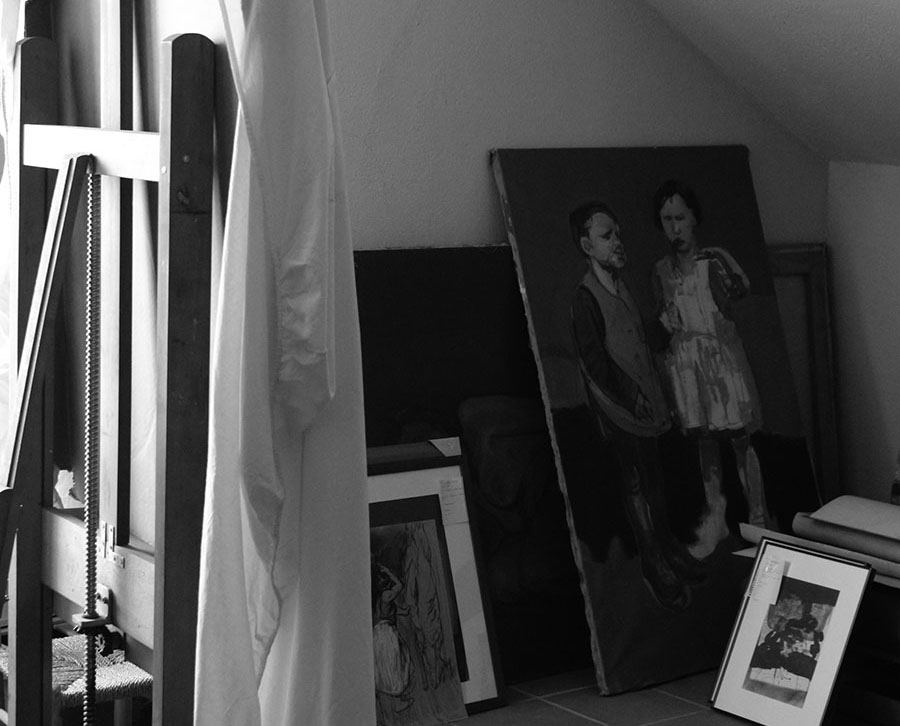 At the end of the 70’s, a young graduate of Fine Arts was one of the great promises of painting in Madrid. Art and talent were in his favor. Everything, except himself. His personality, his mind, his character. Raúl Romero Altares, hermetic, egocentric, voluble and proud … unfortunately ill. A great creator who despite being admired, painted for himself, he refused to show the world his works. A complete collection – immense to be discovered after his death – that he did for his own satisfaction, with a terrible inner suffering. He was such a perfectionist that he bought nothing already made. He was painting itself. Pigments, canvases, racks, nothing was useful that was not made of his own hand. And from there he created, experimented, becoming a great artisan of painting. He did LA painting. However, fear paralyzed him just by thinking about showing it. Capricious destination, curious story.

It is now when his work is exposed, disseminated and commercialized. For sale or as an object of study. An admired work, and that the legal heirs allow to enjoy through Raúl Romero Arte ©, owners and responsible of this web portal.

DO YOU DARE TO SEE IT?